The Core is Getting Soft.17: Noah’s ARC

I haven’t been geeking out on software as much as I was when I started this series of posts on software ironically titled after a lyric from a Minor Threat song, a band that sure as hell never used any damn software.  I’ve been refraining from buying new plug-ins* in favor of making sure the ones I already have are working the way they’re supposed to when I use them live with the Cicadas, which can be kind of nerve wracking.

One thing I did pick up within the last 6 months or so that has proved to be super useful and practical is the ARC 2 software from IK Multimedia.  ARC stands for Advanced Room Correction.  What it does is compensate for the way the room you are listening in boosts some frequencies and cuts others in unwanted ways that make it hard to judge what is actually coming out of the speakers when you are mixing.  It comes with a microphone you use to record stattaco bursts of pre-encoded reference tones from a carefully measured series of positions around the mixing area.  The software uses the resulting data to judge what the room is doing to your sound.  It produces an EQ graph that shows you where the boosts and cuts are happening, and then compensates for them until you get a flat EQ line that lets you hear your mix and not your room.  You do that by strapping it across a mix bus in a DAW like Logic or Pro Tools.  It saves the information you get from the microphone measurements as a preset.  You can make as many measurements as you want, like for different rooms or different positions in the room, but I only did one for sitting right in front of the computer.  Why?  Because I don’t have any friends and no one comes over to my home studio.  Except insects.

I found out about the ARC 2 when Scott Solter picked it up for his studio control room, where we were mixing our new album.  He said installing it was one of the most disorienting things he’s ever experienced as an audio engineer, because the difference was so radical he didn’t know whether to trust it.  I had the same experience when I installed it the first time.  It’s a cliche to say that a particular EQ or whatever makes it sound like someone pulled a blanket off of your speakers to make the sound shine through more clearly.  But here it TOTALLY sounded exactly like that.  Scott and I had the same reaction: If the room was altering or muffling the sound so radically why did we never notice it before?  Did everything really sound as bad as it does now when I disable the room correction plug in?  It’s hard to keep em down on the farm after they’ve seen gay Paris. For him the stakes were bigger than for me because he is a professional mixer, whereas I am merely a performer.  At first he was afraid that records he’d already mixed in that space would now be revealed to be faulty.  That turned out not to be the case at all, fortunately.  But he invited Brent Lambert from Kitchen Mastering, who had originally recommended the ARC 2 to Scott, over to his studio to verify that he could trust that this compensation was really telling him the truth.  We postponed the next stage of mixing until they made sure everything was kosher, which it was, and now we’re very glad Brent gave us this tip before we finished the record.

I didn’t buy it for myself for awhile because, like I said, I’m not a mixer.  Why did I need it when I’m just doing rough mixes along the way?  When I said that to Brent when I ran into him at friend’s house**, he came back with the reassurance, “It pays for itself.”  I was unconvinced until I got to the point of needing to evaluate the mixes at home.  I popped the files in iTunes and all of a sudden was like, “Everything sounds so bass-y compared to what I heard at the studio, we need to some remixing.”  That’s when I ordered the ARC 2 and installed it, (it’s not that difficult to do the mic tests.  A little weird, but not hard.  If you have a cat it might freak them out.)  After that I put all the mixes I had to approve in Logic and applied the ARC 2 over the master bus.  All of my concerns evaporated, everything sounded fine like it did in the studio.  I could trust that the few tweaks I decided were needed after that were on the mark.  I realized Brent was right – I could have wasted a lot of money going back and doing more remixes to fix a problem that had nothing to do with the mixes themselves, but rather had to do with the room I was listening to them.  Like a lot of people these days, I have a home project studio that is just a small regular room in an apartment*** with no sound treatment.  IK Multimedia developed the ARC 2 knowing that so many musicians are working in environments like this now that good recording technology has become affordable and compact enough to use in a home environment.  It’s much cheaper and quicker than installing sonic panelling for room treatment, though it’s not that it makes that process useless, or so I’m told. 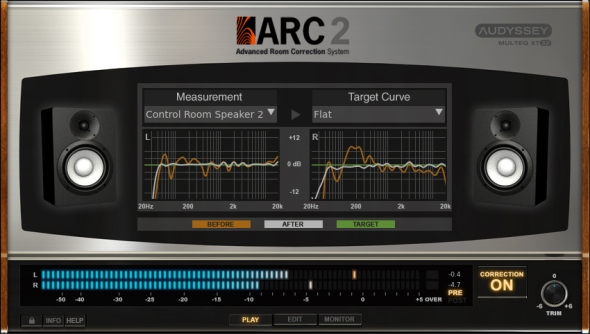 The weirdest part is the graphic display I got in the plug in when I got it up and running.  There was a brown line across the axes of the graph that showed what the mics had picked up coming from the room.  There was a big boost in the low mid frequencies that exactly matched the low end bump I heard when I listened to the mixes before I decided to buy the software.  Empirical evidence, right before my eyes!  Then there was a white line showing the corrected signal and it was relatively even keeled.  It was kinda like putting on night vision goggles or something.

A simple function well performed, it feels now kinda like a well worn saw in a sawdust filled tool box.  Except it’s not covered in dust, or anything else.  It’s…software.  It doesn’t even know the touch of my hand, the erosion of winds and rains, the ravages of time.  Although, like all software, it faces its obsolescence with the grim resignation with which we humans make peace with a peripheral awareness of our mortality.

*A lie was detected at this point in the post by an editor.  The author has in fact purchased several other pieces of software from developers like Soniccouture and Valhalla DSP over the past 6 months, all of which were used in the completion of his supposedly “real” album.  Denial is a powerful thing.

**Apparently dude does have friends. – Ed.

**Another lie.  This one can’t be chalked up to denial, but rather to a cheap and calculated ploy for lo-fi street cred.  The author’s home studio is pictured below…

Like Loading...
04 Aug This entry was published on August 4, 2016 at 11:51 pm. It’s filed under Music, Series of posts, The Core is Getting Soft and tagged ARC 2, Brent Lambert, Devo, IK Multimedia, John Davis and The Cicadas, Minor Threat, Scott Solter, Soniccouture, The Chills, The Kitchen Mastering, Valhalla DSP. Bookmark the permalink. Follow any comments here with the RSS feed for this post.

Older: Mixing complete! Going to Georgia…with a Heart Like a Starfish.
Newer: Help Bring Wildin Back to Riverside High