Kickstarter up and running today

I launched a Kickstarter campaign to help pay for my forthcoming album today.  You can check out the project description and rewards here.

I just got back from spending 4 days recording with Scott Solter, Peter Hughes, Andrew Hiller and Louis Landry at Mitch Easter’s Fidelitorium Recording Studio in Kernersville, NC, (pictured above.)  One of the reasons I moved to NC from MA was because studios are much cheaper here, which made this project possible.  It also allowed me to borrow some really cool guitars from Mitch – one not pictured here was a burgundy and gold Rickenbacker.  I mean, if you’re gonna make a record at Mitch Easter’s studio in NC you gotta use a Rickenbacker in there somewhere!  In exchange, I took promo pictures of his band Let’s Active for a reunion show they’re doing at the Cat’s Cradle club in Carrboro next weekend.  They were really nice!

We had a great time, the chemistry between the players was palpable, there was a buzz in the air like the humming of the Leslie cabinet speaker Peter played through on some of the songs.  I’ve known Peter for 20 years since starting out with Shrimper and it was such a joy to see him play up close and appreciate how his bass playing has matured and blossomed over the years.

Scott’s Production (below right) was awesome.  His suggestions were always on point and really helped shape the songs into form.  We had spent a fair amount of time talking about music over the last year prior to working together and were able to hit the ground running with a common frame of reference.  His appreciation of a wide variety of musical points of reference – from modern classical to ’80’s post new wave pop to dub to ambient to music from Mali was a main part of what drew me to working with him, and I was not disappointed.  His awareness of the political issues that go along with taking an interest in music made by people of color in different parts of the post-colonial world made me feel like I was in good hands while returning to the styles of playing I explored in the Folk Implosion that were influenced by genres like dub and hip/trip – hop.  I was impressed to hear him describe an interview he did with the indie-centric recording magazine Tape-Op.  He refused to talk about “gear” and told them point blank that they needed to do an issue that was not focused on white producers and engineers because of the lack of diversity in the people they choose to interview.  He also had great expressions to punctuate moments when tracks were completed, such as “Awesome Possum,” and “Totes McGotes.”  (The later being a variation on “totally.”)

Andrew’s drumming (above left) was so good I fired myself mid-session for the four songs I was gonna play drums on so he could play on them instead.  In turn, Andrew suggested Louie play drums instead of him for a few songs that had a swing feel to them he thought Louie would tackle with more ease.  Peter and I decided together that I would play bass on a song that had really weird timing that was easier for me to play because I’d had the bass line in my head for 4 years.  There was a real selflessness to the whole thing that was beautiful to see.  Louie tackled difficult parts for a multi-tracked song consisting of piano parts inspired by Schoenberg with patience and precision.  I’ve never seen someone play marimba live before, but watching him put down a part on one of the songs using that instrument was totally awesome.

…but soon realized these guys were so good they didn’t need to feel my spurs in their side in order to excel.  So I just dished out the high fives after they put their parts down and reflected on the virtues of patience, since most of my parts had already been recorded at my home studio or Scott’s studio in Durham.  I got to play here and there, tho’, so it’s all good. 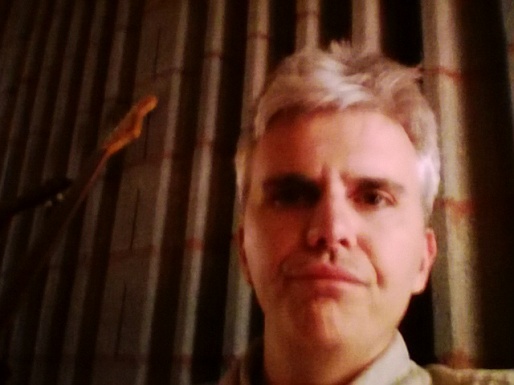 As the Kickstarter page explains, this is a record of songs about social issues and politics.  It’s hard to pull off that kind of thing in pop music format, but the whole thing really floated as the people working on it together shared experiences, insights, and perspectives while we worked together.  I hadn’t met Andrew before the session and his background growing up in Arizona was especially valuable when we were working on songs that address issues about racist immigration policies on our southern borders in this country.  We’d discuss things over lunch or dinner and then go back to the studio and work out the songs together, it was a great daily rhythm. (See Andrew playing with a poster of Angela Davis in the background below – her books on Prison Abolition influenced some of the songs on the project.)

There’s a few tracks left to do – some upright bass, trumpet, and vocal work.  Then comes mixing!  Stay tuned here for more updates.

Above:  Peter regales us in the morning….

Below:  Scott and Andrew listen with rapt attention …. 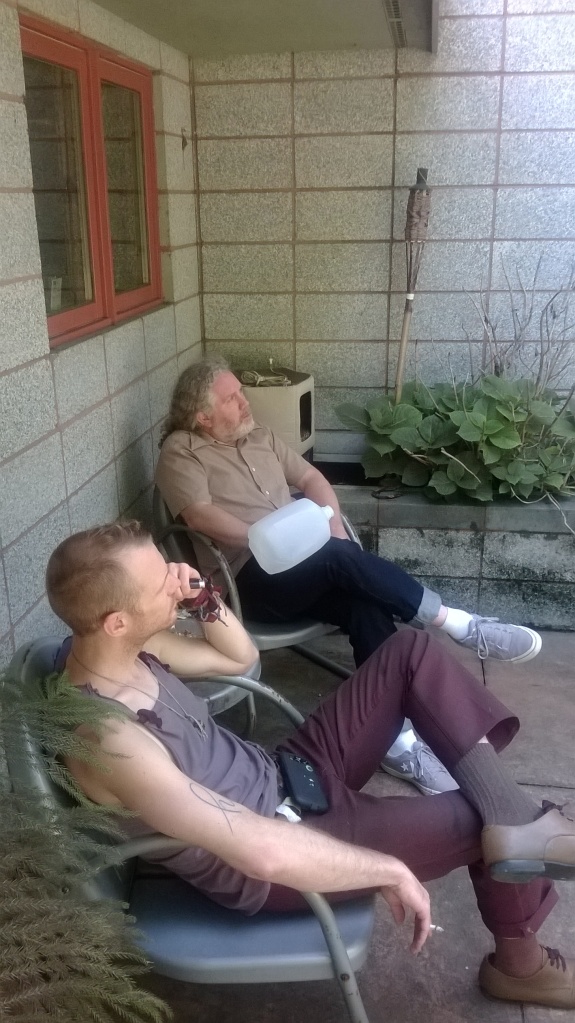