Today the Real News Network, who I encourage you to support during their current drive to win a matching gift, is reporting that “the Michigan strategic fund has decided to issue $450 million in bonds for a new stadium for the Detroit Red Wings, 44% of which will be financed publicly,” while the city is going bankrupt and workers are worried about losing their city pensions.  The following interview is with Frank Hammer, a retired General Motors employee and former President and Chairman of Local 909 in Warren, Michigan. He now organizes with the Auto Worker Caravan, an association of active and retired auto workers who advocate for workers demands in Washington.  He makes the point that public funds have already been used to help build football and baseball stadiums, and that these projects have contributed to its current crisis.  He says that the people most affected by the pending bankruptcy are not lacking in ideas for how to invest public funds more wisely.

He points out that Obama has recently made a major speech on the need to address the climate crisis, which would seem to support their vision.  Unfortunately, the administration bowed to pressure from the energy industry lobby to promote a vision of natural gas as a bridge to a deferred future of green technology, which is basically an endorsement of fracking.  (Fracking is another beneficiary of corporate welfare, as we’ll see in the next post in this series.)  Meanwhile, public dialogue about the solutions its citizens envision for its problem is not as popular as aestheticized photos of industrial decay that feature abandoned building without representing local citizens.  Some have referred to this genre as ruin porn .  Fortunately, others are countering this visual discourse by documenting how people there are coping and adapting to the reality they face, of which the Detroit Urban Agriculture Movement is a great example.

The misdirection of public funds to sports stadiums in Detroit is not an isolated phenomenon.  Another recent example is Rahm Emanuel’s decision to provide taxpayer funds for Depaul University to construct a $100 million basketball stadium while closing public schools and firing teachers and closing mental health clinics due to a “budgetary crisis”.

Of that decision, Dave Zirin wrote in The Nation:

“The same Mayor overseeing the closing of fifty-four schools and six community mental health clinics under the justification of a “budgetary crisis” has announced that the city will be handing over more than $100 million to DePaul University for a new basketball arena. This is part of a mammoth redevelopment project on South Lakeshore Drive consisting of a convention center anchored by an arena for a non-descript basketball team that has gone 47-111 over the last five years. It’s also miles away from DePaul’s campus. These aren’t the actions of a mayor. They’re the actions of a mad king.

If you want to understand why Mayor Rahm has approval ratings to rival Rush Limbaugh in Harlem, you can point to priorities like these. The school closures are taking place entirely in communities of color while the city’s elite feed with crazed abandon at an increasingly sapped trough. As Karen Lewis, the Chicago Teachers Union chief

who led a victorious strike last September fueled by rage at Mayor Rahm, said, “When the mayor claims he is facing unprecedented budget problems, he has a choice to make. He is choosing between putting our communities first or continuing the practice of handing out millions of public dollars to private operators, even in the toughest of times.”

It’s hardly just the labor-left of Chicago pointing out how breathtakingly heartless these priorities are. Rick Telander, the lead sports columnist for the Chicago Sun-Times, penned a piece subtly titled, “With Rahm’s DePaul plan, we’ve entered a new arena of stupidity.” After making clear that DePaul’s team is hardly a magnet for city hoops fans, Telander wrote, “But forget that. Guess who will have to cough up about $100 million to build the thing for the private Catholic university of 25,000, through bonds and the usual sneak attacks of wallet-siphonage—Yes! Taxpayers! Ta-dah!”

makes the shocking statement that the entire business of professional sports would be well into the red if it were not for public subsidies, which come in the form of tax breaks and stadium deals.  Only a few franchises actually make money.  How much money could you save if a city offered to build you a house which you could occupy tax free if you would move there?  Michael Galinsky and Suki Hawley produced a great depiction of this process for the big screen with their 2011 documentary Battle For Brooklyn.

Fred Lynn was once asked why the media climate is so hostile in sports today compared to when he played in the 1970’s.  He said that when he played, the players didn’t make that much more money than the media people who covered them.

They would all go and hang out in the same bars and restaurants on the road, and really got to know each other.  Today, he said, there is so much resentment when you realize that the players are making astronomically high salaries compared to the writers – and most of the fans.  Players and media no longer hang out after the game at the same bars.  The players live in a kind of perpetual gated community that’s like the modern day version of a castle.

I used to think that the mushroom cloud of money in sports came from the invention of cable television and the successes of the players union in establishing free agency.  They played a role, but Johnston’s book shows that the largest factor is that the advent of Reaganomics and neoliberal deregulation created a business climate in which teams could wiggle out of paying taxes and paying for their own housing and real estate.

There are many examples in his book.  George Bush had only one successful business venture before becoming president, and that was his tenure as owner of the Texas Rangers.

The state and local government helped him seize land to develop a new ballpark complex by the power of eminent domain, displacing people from their homes and profiting off renting the land around the park out to business complexes.  Rudy Guiliani gave generous tax breaks and stadium deals to the New York Yankees when they built their new stadium, while collecting gifts of memorabilia from the Yankees whose value was well in excess of the legal limit of what politicians are allowed to accept by law from constituents.  The NFL purposefully leaves Los Angeles without a football team, Johnston writes, because it can threaten any current NFL city to move its team to LA if they don’t come up with the kind of stadium deals and tax breaks the league needs to stay profitable.  Sometimes teams threaten cities with less glamorous relocation plans.  Robert Kraft, owner of the New England Patriots, threatened to move his team to Hartford Connecticut when he was unable to get the state of Massachusetts to fork over money for the construction of what is now Gillette Stadium.

It might not seem like the most convincing bluff in the world, but the state fell for it and Kraft got the government cheese he wanted.  No wonder he gushed about how “we are all Patriots.”  If your state government forks over that much cash to you, what’s not to like?

Johnston’s source for a lot of his research is a text and companion website Field of Schemes. Their publisher’s website provides the following summary:

“Field of Schemes is a play-by-play account of how the drive for new sports stadiums and arenas drains $2 billion a year from public treasuries for the sake of private profit. While the millionaires who own sports franchises have seen the value of their assets soar under this scheme, taxpayers, urban residents, and sports fans have all come out losers, forced to pay both higher taxes and higher ticket prices for seats that, thanks to the layers of luxury seating that typify new stadiums, usually offer a worse view of the action. 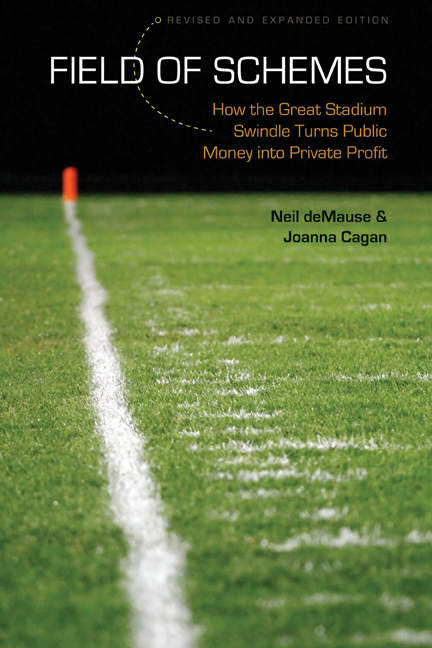 The stories in Field of Schemes, from Baltimore to Cleveland and Minneapolis to Seattle and dozens of places in between, tell of the sports-team owners who use their money and their political muscle to get their way, and of the stories of spirited local groups—like Detroit’s Tiger Stadium Fan Club and Boston’s Save Fenway Park!—that have fought to save the games we love and the public dollars our cities need.
This revised and expanded edition features the first comprehensive reporting on the recent stadium battles in Washington DC, New York City, and Boston as well as updates on how cities have fared with the first wave of new stadiums built in recent years.”

Their website provides a running record of the daily unfolding of this corrupt process – you can read their update on the Detroit Red Wings case here.