I can think of few artists more identified with the electric guitar than Thurston Moore.  Unlike the guitar god of classic rock, Jimmy Page, who layered his hard rock records with gobs of acoustic fretted instrumens, the guitar god of post punk / undie music always stayed electric.  The only exception I can think of is the break to “Catholic Block,” where a single acoustic guitar appears to leaven out (or intensify?) the assault of the electric guitars on that incredible song.  Otherwise, Thurston limited his displays of sophistication to those button – down white shirts he wears.  In the downtown New York world of Wall Street, you need an Armani suit to make a claim to status.  In the downtown New York world of Art Rock, you only need an unbuttoned Oxford shirt to appear more sophisticated than the hordes of thrift store t-shirt wearing fans in your audience.  Some of whom may be learning your songs carefully at home:

The first time I saw Sonic Youth, on the Daydream Nation tour, the thing that made the biggest impression on me happened before the set even began.  Thurston came out on stage to tune his electric guitars while the PA system played a mix tape of hip hop records I assumed he had made.  While the guitar-less tracks rolled out across the audience in sonic waves, Thurston spent a good 20 minutes – or so it seemed – silently tuning his collection of vintage Jazzmasters and Jaguars, with his back turned to the audience the entire time.  The only time you could get a look like that at someone’s ass was at a strip club.  He had a slight lilt to his waist that went will the waterfall of blond hair that seemed to be pouring towards the 12th fret of each instrument.

I began to wonder if the hip hop on his tape didn’t have any electric guitars on it because Thurston had cornered the market on these instruments, like a commodities trader.  After this awesome display of power, enhanced by the fact that the audience were all seated in chairs at the Somerville Theater, the set itself seemed like an afterthought.  It kinda reminded me of the story my dad told me about seeing Jefferson Airplane in the Village back in the ’60’s.  He said there was this piercing bright red light that stunned the audience into submission right at the start of the show.  He said that everything else after that seemed was anticlimactic. He did say that Grace Slick looked very knowing, sophisticated and arrogant “in the way it’s easy to look when you’re 24.”

I really got into Sonic Youth a few years later after I first saw them live.  It happened when I went back and bought EVOL in 1990.  It soon became my favorite Sonic Youth album.  I used to listen to that record back to back with The Fabulous Johnny Cash over and over again when I was putting together my first cassette and 7″.  It led me to try integrating spoken word pieces and musical fragments with semi-conventional “songs,” because of the way EVOL as a whole sounded so theatrical, so untied to “RAWK.” When Thurston gave “Stars and Songs” a good review in Ecstatic Peace, I wondered if it was cuz he’d seen a reflection of himself in the way the songs were put together.

I did a rough collage on the circular label in the middle of my first 7″ “Rip, DIY” in which I fused together a picture of Thurston and a picture of Tom Petty (taken from the cover of the “Learning to Fly” cassette single.)  The collage was an oblique reference to the style of the song “Blonde Downtown” on the single, which I thought of as combining the concise classic rock style of Petty with the open tuned and dissonant explorations of Thurston and his partner Lee Ranaldo, to whom I give short shrift in this review/post.  I don’t think “Blonde Downtown” came off quite the way I wanted, but I used to think of the Folk Implosion song “Chained to the Moon” as the full realization of this formula, after 8 years of practice.

EVOL left a lot of space for silences in a way that made me think of the acoustic parts I grew up loving on records by Johny Fahey, who Thuston has said was “a secret influence” on his band.  I’m not sure about the idea of secrecy, but I liked the harmonics of “Shadow of a Doubt” and the way they break into sheets of distortion during the “bridge” of the tune.  These sounds made the guitars sound like brushstrokes in a painting.  They drew my attention to the texture of what came out of the amplifiers.  That fabric became more important than the melody or chord progression, which was implied but never stated.  For all of the supposed influence of Sonic Youth of indie rock since their heyday, to my mind no other band has made a cathedral of sound in the same way they did.  I think a lot of it has to do with the relative foregrounding of Ramones style bar chord roots most retain in the alternate tuning universe.

I used to think the band’s songwriting wasn’t as strong as their ability to generate raw sonic landscapes.  Sometimes they seemed to imply more than they delivered.  So when a friend told me Thurston Moore had made a really good acoustic solo record, I was a bit skeptical.  When he said it had strings on it “because Beck produced it” I was even more surprised.  When I checked out Benediction, it sounded like an improbable cross between Sonic Youth and… Astral Weeks?!?!  The strings sounded a bit “punched in” to me (meaning the sound space they were recorded in didn’t integrate with the reverb/space of the rest of the song.  Especially on “Circulation.”)  But I liked the way Thurston’s voice tended to tail off at the end of each line in volume.  It sounded like he was having a hard time hitting the lower note at the end of the phrase “let her go.”  I thought it was cool that Beck hadn’t corrected this “flaw” as a producer.  I remember working on the last Folk Implosion record and being mad at Wally for pointing at a computer screen rendition of Lou’s voice as they worked on building up the harmonies for the song.  The line stayed straight in both pitch and volume right through to the end of the line.  “See you couldn’t build up these harmonies with most singers, because they can’t stay on pitch through the end of the line.”  As I looked at a print of my own vocal graph making a right turn to the south, I knew this message was intended in part for me.

The tone of the guitars on “Demolished Thoughts”  is excellent.  So many times acoustic guitars are recorded in a horribly tinny sheen that comes from mediocre pickups tucked directly under the strings that treat acoustics like they are “unplugged” electrics.  This is the sound of the entire travesty known as the MTV unplugged sessions, which I hated.  (Including the Nirvana one, which I thought was awful.)  In contrast, the guitars here have a wonderful low to mid range.  You can really hear the wood, not just the strings.  The guitars can carry the record on their own without being relegated to the status of a complementary backing instrument designed to convey a half hearted impression of “intimacy” and “folksiness.”

This works especially well for songs like “Orchard Street” which seem to remain in a kind of throttling stasis rather than rush to a conclusion.  They remind me of Sonic Youth songs like “Death Valley 69” that evoked massive industrial factories more than the car referred to in that song’s lyrics.  If the car usually signifies the “freedom” of adolescent driving in pop music, the factory strikes me as having more to do with portraying the way in which we are stuck in repetitive patterns of motion in service of a larger capitalist engine that crushes everything in its path.  (While seeming to exercise our personal “liberties.”  A la “Freedom of Choice” by Devo.)  The factory stays in one place while spinning, like the corn on the cob in Charlie Chaplin’s Modern Times.  We struggle to keep up with the flying sparks and kernels on our lunch break.

I really like the way “Orchard Street” doesn’t have to be in a rush to get where it’s going.  Clocking in at over 6 minutes, it speaks to me about the patience and adjustment to the longer spans of time it takes to grow spiritually as one ages.  I think it’s a fantastic song.  I get a similar vibe from “In the Silver Rain With A Paper Key.”  I think it’s a great record overall, despite some inconsistencies, Thurston’s best work since before Sonic Youth signed to Geffen.  Is it because he’s back in the indie universe with Matador?  who knows.  One thing I do know: it won’t be long before Martin or Taylor come out with a Thuston Moore signature custom acoustic guitar that costs $1,600 like the Fender “Thurston Moore Jazzmaster” pictured below: 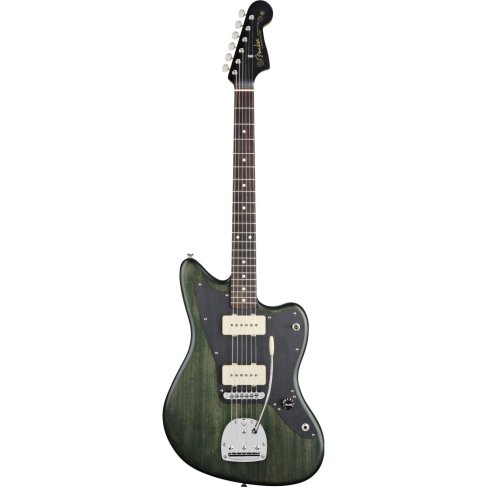 Older: To the victor go the spoils…
Newer: Other John Davises.1: My life as an 18th century batsman