To the victor go the spoils…

The record producer Joe Boyd visited a studio in a former eastern block country shortly after the fall of the Berlin Wall.  The engineers there proudly showed off what they thought was a state of the art newly acquired reverb unit they had acquired from some western engineers who visited their studio.  When Boyd asked what they had paid for it, they said “we traded it for out dusty old EMT 140 plate reverb.”  Joe immediately recognized they had been taken for a ride.  The EMT 140 is a classic unit that collectors pay big money for in the West. 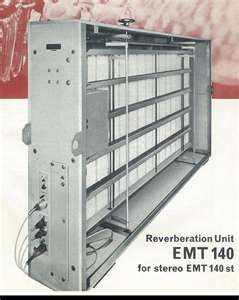 The unit they traded it for wouldn’t fetched nearly as much back in the US or UK, nor would it have seemed particularly new or exciting.  Joe said, “it’s probably enshrined at Sunset Sound in Los Angeles now.” When Bob Fay posted a bunch of Hungarian music on Facebook today, it made me think maybe these tunes were made with that old unit they were swindled out of:

When I read this story in Tape Op magazine, it struck me as a great metaphor of the larger stripping off of the assets of formerly Communist countries that took place at that time as newly made oligarchs cut deals with transnational firms in the Boris Yeltsin era.  Of course, most of the other examples of this phenomenon are far more tragic.  The most depressing example of this phenomenon I know of is chronicled in a book I recommend called Trafficking and the Global Sex Industry.  Some of the pieces in this anthology chronicle how the elimination of state supported free day care and medical services threw huge numbers of women into poverty in the formerly communist countries.  This led to skyrocketing rates of prostitution in their native countries and abroad, as destitute women were trafficked to countries around the world as sex workers.

“Trafficking in women is a new phenomenon for [the former Soviet Union]…prior to 1991, there were virtually no reported cases of trafficking in women from the former Soviet republics to the West.  Yet since the breakup of the Soviet Union, this phenomenon has reached epidemic proportions…an estimated 175,000 persons are trafficked from Central and Eastern Europe annually.”

“The collapse of the Soviet Union resulted not only in poverty and unemployment but also in drastic deterioration of the system of social protection.  Many of the social services, which under the Soviet system were a norm, are no longer offered.  Before the collapse of the Soviet Union, day care for children, at all levels of education, and medical services were provided free by the government.  Now, many day care centers have closed and the remaining ones are not affordable to many parents.  Health care and education systems are deteriorating due to lack of funding.”

“Mail-order bride and marriage agencies via the Internet have become increasingly popular among women who want to marry a foreigner.  Their hope is to improve their economic situation…(these women) often become victims of men who ‘order’ them only to sell them to pimps.”

Today it has almost become a cultural stereotype to think of Russian or Eastern European prostitutes.  There seems to be a jingoistic power dynamic at play – we won the cold war, we take their women.  There was a plot line in the stevedore season of the Wire that dealt with this phenomenon.  Sometimes it seems that the growing percentage of models from Eastern Europe is a sly nod to this demographic as well.  Like I said in my previous post on Ozzie Guillen and the Castro/Cuba controversy, I’m not a communist or a Soviet Union supporter.  But it was interesting when I read that article that I had read nothing in the 20 years since 1991 that had anything to say about this massive social dislocation.  History had to be painted in a good guy bad guy fashion that wrote the fate of these women out of the picture.

You can see a PBS frontline doc on this issue here –

Disposable People by Kevin Bales has a devastating section about the sex trade in Thailand and Southeast Asia, one of several examples he provides of how slavery persists in the modern day world.