Stuck Inside Samsara With the Karmic Blues Again 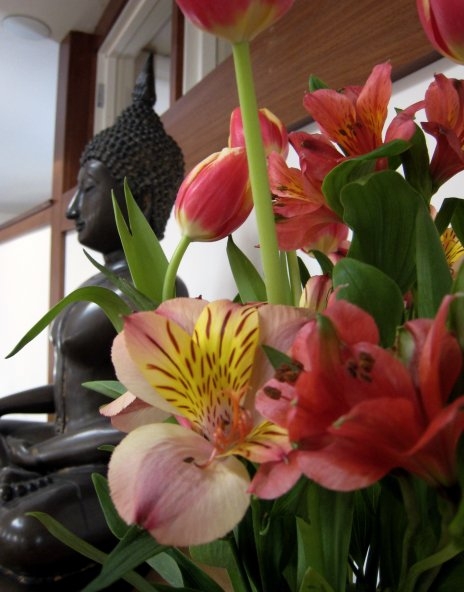 I’ve managed to fulfill one of my new year’s resolutions – to start this blog and website.  But I don’t put a lot of stock in the whole new year’s ritual.  If I did, I might be posting “Getting Better” by the Beatles or “Don’t Stop Thinking About Tomorrow” by Fleetwood Mac, instead of the two songs I always think of the most this time of year:  Stuck Inside of Mobile with the Memphis Blues Again by Bob Dylan and Beautiful World by Devo.

The above video begins with images of flowers and clouds.  In this culture, these things are usually used to suggest the high hopes invested in romantic beginnings, on the one hand, and the heaven that awaits reformed and repentant sinners after death on the other.  Devo use these icons to lead into images of kitschy grooming and sexuality that are mixed together with found footage of various kinds of worldly disasters.  They suggest that the Rites of Spring and other celebrations of regeneration such as the new year are also celebrations of repetitive cycles of social trauma.  We see mushroom clouds, starving children, KKK rallies, soldiers marching and fighting in the trenches of World War I, and the brutal repression of demonstrators during the civil rights movement.  The video ends with an image of the American Flag waving behind a smiling drum majorette, who we’ve just seen leading a marching band that’s cut together with marching soldiers and other adherents to various kinds of mass spectacle.

The singer is a highly artificial figure with fake plastic “normal” hair and a clean cut but slightly nerdy style of dress.  This costume suggests that the words he sings –  “it’s beautiful world we live in , a sweet romantic place, beautiful people everywhere, the way they show they care, makes me want to say: it’s a beautiful world” – are a constructed plastic fantasy.  The way he sings and the way the instruments behind him are played are highly constricted and stiff sounding.  Much like Devo’s cover of the Rolling Stones “Satisfaction,” this style suggests that the rock and roll fantasy of freedom from repressive social mores via youthful rebellion has become a new kind of social straightjacket by 1981, the year the song was recorded.  The “New Traditionalists” album this song comes from was designed in part to comment on how the band’s biggest hit, “Whip It” itself became an example of this process.  Devo felt their new audience missed the point of what the song was really about, as if it was a celebration of what it was in fact criticizing.  In this video, that herd mentality is impersonated by the lead singer in a way that is broken only by the later choruses in which he tells the audience “it’s a beautiful world for you, but not for me.”

This disenchantment with the spinning of the wheel of worldly fortune reminds of the way that the Buddha used images of flowers (and clouds): to suggest the essentially unreliable nature of what he called “The Vicissitudes of Life” 2,500 years ago.

Unlike Hollywood movies and game shows, the pursuit of these shifting variables does not lead to an ending of any kind in the Buddha’s teachings.  No happy endings, no tragic endings.  Just endless oscillation back and forth between each of these changing conditions  I like to think of Dylan’s “Stuck Inside of Mobile With the Memphis Blues Again” as an illustration of this principle.  (Even though Allen Ginsberg failed to “convert” Dylan to Buddhism, and pompously criticized him for “selling out” to the Judeo-Christian belief in a personal God.  Maybe that’s why Keith Richards referred to him as a “gasbag” in his recent book “Life.”)

“Stuck Inside of Mobile” uses a typical blues structure, but turns it on its head by drawing it out from a standard three minute length to a track that spins round and round like a top for more than 7 minutes.  The B7th chord that arrives at the end of each 12 bar structure starts to sound like a renewal of the condition of being stuck, rather than a moment of liberation and release.  The band holds onto a chord at the end of each cycle, as if it has to catch its breath for a moment to gather the strength necessary to launch into another ring around the fountain.  If the film Todd Haynes made about Dylan had used the entire song during the credits, there might not have been anyone left to see it by the time they came to an end.  (Incidentally, Haynes seems to have inserted an oblique nod to the New York street musician Moondog about 53 seconds into the following clip:)

The song begins with an image of circularity that warns of what’s to come:  “Oh the rag man draws circles, up and down the block.  I’d ask him what the matter was.  But I know that he don’t talk.”  Much like the parable of “Frankie Lee and Judas Priest”, in which the neighbor boy “muttered underneath his breath, nothing is revealed,” there’s no view from a summit in Bob’s lyrical landscape.  Each verse ends in a resigned admission of dashed hopes of communication or understanding.  Sometimes it’s the singer who’s confused, and sometimes it’s the oddball characters that surround him:

“me, I nearly get busted / And wouldn’t it be my luck
To get caught without a ticket / And be discovered beneath a truck.” verse 5

“Now the preacher looked so baffled / When I asked him why he dressed
With twenty pounds of headlines / Stapled to his chest
But he cursed me when I proved it to him / Then I whispered, “Not even you can hide
You see, you’re just like me / I hope you’re satisfied” verse 6

“And like a fool I mixed them / And it strangled up my mind
And now, people just get uglier / And I have no sense of time” verse 7

‘And I say, “Aw come on now / You know you know about my debutante”
And she says, “Your debutante just knows what you need / But I know what you want” verse 8

If Dylan had asked the Buddha this question in Times Square on New Year’s Eve, he would have gotten an answer.  The Buddha was more confident than Dylan that there is indeed a way out of having to go through all these things twice (or 9 times.)  Instead of making resolutions after the ball drops to change one’s act in such a way as to bring about only gain, praise, fame and pleasure, he might have suggested dropping the ball altogether.  The sutra on the Vicissitudes of Life describes the goal of dharma practice as follows:

“Monks, when an instructed noble disciple comes upon gain, he reflects upon it thus: ‘This gain that has come to me is impermanent, bound up with suffering, subject to change.’  And so he will reflect when loss and so forth come upon him. He understands all these things as they really are, and they do not engross his mind.  Thus he will not be elated by gain and dejected by loss; elated by fame and dejected by disrepute; elated by pleasure and dejected by pain.  Having thus given up likes and dislikes he will be freed from birth, aging, and death, from sorrow, lamentation, pain, dejection and despair, he will be freed from suffering, I say.”

Rereading this sutra makes me wonder: are all those athletes who recite mantras about living in the moment and taking it one game at a time – without getting too high when they win or too low when they lose – taking their first steps towards enlightenment?  Or is the PED-induced testosterone just wearing off after game time?.

Somehow I don’t picture them listening to the following talk, in which Joseph Goldstein cracks a joke about the competitive mind by saying that flowers aren’t racing to see who blossoms first:

Older: MLK Day: What I Didn’t Learn About Jim Crow in School
Newer: The Man Who Taught Me To Hold a Holga