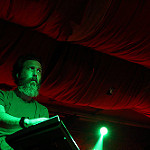 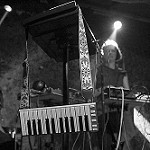 Me and the Cicadas are back from Europe, where I was locked out of posting on this website cuz of technical difficulties.  Alex, Wendy, Scott and I had a great tour with some pony-riding and other vacation hijinks mixed in between the shows.  Thanks to the many folks who helped make it happen.

Our new record is now available for pre-sale with lots of extras that relate to either the politics of the record or musical details and history and influences.  You can check it out now on Pledge Music.  Any purchase gets you a free advance download of the track We’ll Teach Them How to Privatize and Stock Up All the Prisons, which previewed on Brooklyn Vegan back in April.

I had fun reading Earl Lovelace’s Is Just a Movie while traveling, while getting about a third of the way through biographies on Derek Bailey and Ryszard Kapuscinski.  I also scored a copy of Peter Linebaugh’s The London Hanged at Voltaire and Rousseau books in Glasgow, which has towers of unsorted used books and a cute and surly tabby cat prowling around.  Just around the corner was Thistle Books, where I snapped up another Lovelace novel and Upton Sinclair’s book on oil and some reportage from Garcia Marquez.  I also picked up some excellent vinyl and cd offerings at Quelque Part Records in Lille, France, and Tome Records in London, both shops I would recommend to anyone. If you’re in Glasgow, I would also really recommend the Botanic Gardens there.

Highlights of the tour for me were playing and hanging out with two of my favorite artists, both of whom put on amazing shows…Mike Ladd in Paris and Seward in Barcelona, Cal Rosal, and Salles-La-Source.  I hope I can collaborate with those guys in some form someday.

Coming up are the following shows….first one is solo, others are with Rob and Justin, version of the Cicadas that went out in April on the East Coast, Evil English (Rob’s band) will be opening!

Hope to see some of you out there!