Monsanto in the Classroom?

I spent the weekend editing vocals after reading an article that bore close relation to the subject matter of one of the songs I was working on.  The track is called Contamination in the Grass and it deals with Monsanto and other similar agribiz corporations such as Dow Chemical and Syngenta.  The lyrics takes many cues from Silent Spring by Rachel Carson, which is widely regarded as the book that launched the environmental movement.  Her text links the use of pesticides on a massive scale to various health problems, especially cancer, which took the author’s life only two years after the book’s release.

Last week, a major study was published by Anthony Samsel, an independent scientist and consultant, and Stephanie Seneff, a senior research scientist at MIT, that broadens Carson’s concerns to a even wider variety of health issues than she wrote about 50+ years ago.  The study focuses on Glyphosate, the active ingredient in Monsanto’s Roundup, the most popular pesticide on the planet. According to Reuters, “The EPA is conducting a standard registration review of glyphosate and has set a deadline of 2015 for determining if glyphosate use should be limited. The study is among many comments submitted to the agency.”

A flurry of articles have quoted the following conclusion, which calls for further research:

“Given the known toxic effects of glyphosate reviewed here and the plausibility that they are negatively impacting health worldwide, it is imperative for more independent research to take place to validate the ideas presented here, and to take immediate action, if they are verified, to drastically curtail the use of glyphosate in agriculture. Glyphosate is likely to be pervasive in our food supply, and, contrary to being essentially nontoxic, it may in fact be the most biologically disruptive chemical in our environment.”

As an educator, I’m especially interested in the link between these chemicals

and ADHD and Autism, two health issues that are hot button topics in primary education and beyond.  Many of the most challenging situations I experience in my work are linked with those two conditions.  I’m often struck by the difficulty teachers and parents experience in coming to grips with the level of responsibility we attribute to students who experience significant difficulty in school because of ADHD or ASD (Autism Spectrum Disorders.)  Similar issues can present themselves with respect to anxiety and depression.

When children fall short of our expectations as adults, frustration sets in. Statements can be made about the failures of the child that may be blaming the victim of a condition that is now being linked to causes having to do with environmental contamination and other biological factors, such as genetics.  On the other hand, people look for ways to avoid doing things they don’t want to do, and I have seen children with autism or ADHD feign helplessness in the face of a task they’d rather not work on, just as students use any number of strategies to get what they want from adults.

I have learned from teachers who have pushed students with autism to do things they strongly resisted doing that they later loved as their favorite activities.  I had a conversation with my principal about this last Friday, referring to a time he had persisted in introducing a child to a web based reading program despite the fact that the student was pushing the computer away while in tears for a good half hour to 45 minutes.  I had run up against this same impasse and given up after 10 to 15 minutes, worried that I was subjecting the student to a punitive exercise that failed to accept his disability.  However, after the principal’s intervention, the student fell in love with the program and asked for it as his first choice, expressing disappointment when he was asked to do something else. It really helped him grow as a reader, and I was relieved to find another activity he could stick to with some success during the time he spent in my General Education classroom.

I don’t expect that a scientific field of research will be able to help us definitively assess what students with Autism or ADHD can and can’t do, but it will be interesting as time goes on to see how ongoing research will help us understand better how to serve students with these conditions.  One of the articles I read showed a very striking graph 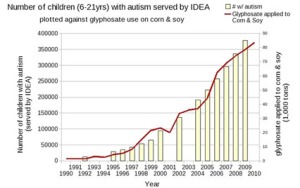 that showed a rise in autism that almost exactly mirrored a rise in the use of Glyphosate over the same number of years.  Of course, correlation is not necessarily causation, and there is debate about the validity of the extensive claims made in the article’s conclusion. But the data is eye opening.  It’s also not surprising to everyone.  One of the autism teachers at the school where I work told me last year that she believed that the sharp rise in the frequency of autism we see in school systems is linked to toxic contamination in our environment.  Seneff warns this increase may be on the verge of becoming an even bigger epidemic, stating that “At today’s rate, by 2025 1 in 2 children will be autistic.”

I don’t link Monsanto to autism specifically in the lyrics of the song.  I thought about going back and adding it this weekend, but decided against it because it felt like I’d be forcing something from the head onto a song that had already been fully formed and should be left alone.  I also felt I needed to take the time to learn more about it rather than put something in a song based on a couple of articles I read the day before about a study that calls for further research.  But it made me glad the song is on the record.

One synergistic factor that helped the realization of the track was the experience I had of driving past Syngenta’s “Crop Protection Regional Headquarters” in Greensboro NC on my daily trek from Durham to Fidelitorium Studios in Kernersville,

where we recorded most of the instrumental tracks for the song.  It’s a glassy facade with a massive surrounding “lawnscape” that looked like it had been drawn in Photoshop rather than grown out of organic matter.  Of course this was only fitting!  I didn’t know it at the time, but when they say this structure is Syngenta’s “Regional” HQ, they don’t mean The South.  They mean for all of North and Central America:  Syngenta’s website attaches the acronym “NAFTA” to this entity, which I suppose means that it administers their business for the geographical area covered by the North American Free Trade Agreement of 1994.  NAFTA itself is the subject – or should I say the target – of a song called Sugar Daddy Candy Corn that we also worked on at Fidelitorium. Corn and Soy are the two major crops that last week’s study discuss as treated with Roundup, and are probably the two most widely produced and used agricultural commodities in the Americas, if not the entire world.  Soy is the subject of another song we recorded at Fidelitorium, using their gorgeous Grand Piano.

The sight of Syngenta’s modern castle reminded me of driving by the Blue Cross Blue Shield of North Carolina’s corporate HQ on the 15/510 that runs between Chapel Hill and Durham – also massive, glassy, and surrounded by a herbal moat whose stasis is not known in nature.  Blue Cross and its health insurance industry ilk are one of the subjects of another song on this album, called Stock Up All the Prisons, which winds itself around prisons, drug policy, gun policy, and hospitals.  The song identifies private jets and golf courses as the location where much legislation affecting these topics is written by lobbyists.  Of course, golf courses are one of the other main landscapes that is a popular dumping ground for Roundup and its ilk.  It’s smooth cut glassy green surfaces reflect a domination, control and subjugation of nature that is the shared intent of these interlinked tentacles of corporate capitalism.  I’m in the early stages of working on the cover art for the project, but perhaps I should find a visual place for these landscapes somewhere on the package – or maybe just for the bottles that sustain them: