(This is the first in a new series of posts about how corporations that claim to generate profit in the private sector are heavily subsidized by taxpayers in ways that I could only wish fields like education and healthcare were.  For an overview on that, see “Free Lunch:  How the Richest Americans Enrich Themselves at Government Expense (and Stick You with the Bill,” by David Cay Johnston.) 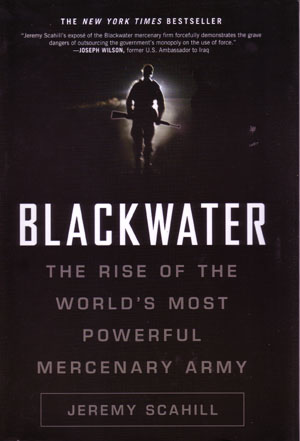 which I was motivated to read after I heard Jeremy speak about his new film “Dirty Wars,” which is also the name of his latest book.  Two of the most powerful passages in “Blackwater” cover lawsuits filed by the families of employees of the private military firm (later rebranded as Xe and now known as Academi) who were killed in Iraq and Afghanistan. The first passage, which runs from page 227 to 236, is about the suit filed by the families of the private contractors who were dismembered and hung from a bridge in Fallujah, leading to the 2004 military assault on that city.  The second passage, which runs from page 237 to 252, is about a less publicized incident in which a turboprop plane operated by Blackwater’s Presidential Airways crashed in Afghanistan, killing three US soldiers and 2 Blackwater pilots.  The lawsuit in this second case was filed by the families of the soldiers that Blackwater was transporting, rather than the families of the company’s pilots.

Scahill writes that “the issues surrounding the crash would prove to be much the same as those surrounding Fallujah, though they would draw far less attention.  The families of the soldiers killed in the Blackwater crash alleged that the company had allegedly cut corners, sidestepped basic safety procedures, and recklessly caused the death of their loved ones in the process.  At the center of the case, as in that of the Fallujah lawsuit, was once again Blackwater’s claim that its forces were immune from any lawsuits because the company was part of the U.S. “Total Force” in the war on terror.” (239)  The military contracting industry closely monitored Blackwater’s arguments in the Fallujah and Afghanistan cases. The stakes were high, since at the time the lawsuit was filed, US taxpayers had picked up the entire compensation bill for more than 428 private contractors who had been killed in Iraq, a figure that was soon adjusted to 647 in September of 2006 by the U.S. Department of Labor.  (236)

Scahill writes that Blackwater  asked the courts to recognize the federal Defense Base Act (DBA), government insurance that covers some contractors working in support of U.S. military operations, as the sole source of compensation for the men killed at Fallujah.  The DBA capped the death benefits available to the families of the contractors at $4,123.12 a month.

The attorney for the families is quoted as saying “What Blackwater was trying to do is to sweep all of their wrongful conduct into the Defense Base Act. What they’re trying to do is to say, ‘Look-we can do anything we want and not be held accountable.  We can send our men out to die so that we can pad our bottom line, and if anybody comes back at us, we have insurance.’  It’s essentially insurance to kill.'” (232)  The point the lawyer does not make, but that Scahill does, is that they got this insurance for free.  Given that insurance costs are likely to be a major factor in the accounting ledger of a private military firm, that’s a significant chunk of government cheese.

What struck me while reading the details of these cases was the resemblance of the legal arguments made by Blackwater to those made by the giants of the financial sector in the wake of the 2008 crisis.  Much like Bank of America, Goldman Sachs, or JP Morgan, Blackwater socialized the risk of their ventures while privatizing the profits that came from them.   The Iraq war has often been analyzed as a war waged for oil, but it’s also true that contemporary US warfare generates bonanza scale profits in and of itself, regardless of what resources it secures for multinational corporations.  Firms like Blackwater and Halliburton pocket the dividends of government military contracts, while escaping the kind of legal liability that is supposed to hold corporations accountable.  The use of government immunity from prosecution as a legal argument was tantamount to a kind of warfare welfare in much the same way as the logic of Too Big To Fail allowed banks to take bigger and bigger risks without having to pick up the tab, because the government bailed them out when their speculative investments led their companies to bankruptcy.  Congress has yet to implement regulations that would prevent the same thing from happening again.

In the Fallujah case, Blackwater saved $1.5 million dollars by removing a stipulation from their contract that they must supply two armored vehicles to support the kind of operations their employees were killed carrying out.  The lawyer for their families told Scahill “These men were told that they’d be operating in armored vehicles.  Had they been, I believe they’d be alive today.” (227)  Instead, they went out in regular SUVs, and, according to the lawsuit, “were not provided with a detailed map of the Fallujah area…’The team had no knowledge of where they were going, no maps to review, nothing to guide them towards their destination.’ According to Callahan, there was a safer alternative that went around the city, which the men were unaware of because of Blackwater’s alleged failure to conduct a ‘risk assessment’ before the trip, as mandated by the contract…This was not done, attorney Miles alleged, ‘so as to pad Blackwater’s bottom line’ and to impress ESS (another private contractor) with Blackwater’s efficiency in order to win more contracts.” (228)

You might expect left wing journalists like Scahill to hold these kinds of opinions about a the cynical calculations of a firm like Blackwater.  But when the parents of their employees, who do not share that political affiliation, and believed their children were serving their country in an honorable way, speak up along these lines, it’s even more powerful.  One of the mothers “said that the families decided to sue after being stonewalled, misled, and lied to by the company.  ‘Blackwater seems to understand money.  That’s the only thing they understand,’ she said. ‘They have no values, they have no morals.  They’re whores.  They’re the whores of war.”  As if to prove her point, “Blackwater filed a claim against the estates of the four men killed in Fallujah seeking $10 million, charging that the families had breached their loved ones’ contracts with Blackwater, which stated the men could not sue the company.” (235)

The government gets something in return for the insurance subsidy they supply to contractors like Blackwater.  Scahill writes that “With the aid of mercenaries, you don’t need a draft or even the support of your own public to wage wars of aggression, nor do you need a coalition of ‘willing’ nations to aid you.” (365.)  Popular support or perhaps indifference is promoted nonetheless by the fact that the death of mercenaries are not counted when the casualties of war are reported to the public.  A former Navy SEAL who enlisted in the Blackwater Academy is quoted as saying “We’re expendable.  If ten contractors die, it’s not the same as if ten soldiers die.  Because people will say that we were in it for the money.  And that is a completely different connotation with the American public.”  (366.)

Some of the most powerful statements I have read against the war and the motives of those who profit from them come from veterans and their family members.  We would do well to listen to their voices with the same attentiveness that Schaill displayed while researching this remarkable book.