It’s easy while thinking critically about trends in US history to fall into two traps – romanticizing a period in the past when things were supposedly better, or telling the story of past oppressions in ways that make it sound like no one spoke or acted out against it at the time.  The recent book News For All The People:  The Epic Story of Race and the American Media, by Juan Gonzalez and Joseph Torres, avoids both these traps deftly, and is therefore highly recommended.

It is relatively well known, though not as well known as it should be, that the supposedly free press in this country is suffering from corporate consolidation, by which fewer and fewer big firms own more and more media outlets.  If you’ve ever flipped through a listing of 4000 channels on a cable package without finding anything you really wanted to watch, you know what I’m talking about.

This trend has been going on for years.  My aunt was a journalist who wrote for the News Journal of Wilmington, DE before and after it was bought out by the Gannett chain in 1978.  She said that the new management that took over in the wake of this purchase eviscerated the paper and trivialized its content in ways that made her feel like something she had been proud to be a part of became a shadow of itself.  Shortly after The Folk Implosion were signed to a major label, another wave of corporate consolidation reduced the record industry to what Lou once called “five fingers of the fist,” making an already tough climate even tougher to negotiate. Today, there are only three fingers left – Universal, Sony and Warner.

The 1998 purchase of Polygram by Universal’s (then) parent company Seagram’s was just one of many examples of how media consolidation accelerated in the wake of the Telecommunications Act that was passed by the Clinton administration in 1996.  50 large firms dominated the market in 1983.  That number shrank to 10 by 1997. The law was the first major revision of public policy in this area since 1934.  Title 3 of the act  promoted media mergers and consolidations, which continue today with no end in sight.  The FCC is currently considering proposals to “remove the few remaining limits on how many radio and TV stations and newspapers giant media companies are allowed to operate in a single market.” (Black Agenda Report, 11/27/12.)

Robert McChesney’s book Rich Media, Poor Democracy chronicles how the Telecommunications Act of ’96 made the virtually unnoticed and shocking giveaway of the new digital broadcast spectrum to the major broadcasters for nothing, a gift valued at somewhere between 40 and 100 billion dollars.

This followed on the heels of Clinton/Gore’s earlier decision to hand over control of the infrastructure and protocols of the Internet to a handful of telecommunications giants like AT&T and MCI for — you guessed it — nothing.

Gonzalez and Torres show that government policy has played an instrumental role throughout the history of this country in reining in the freedom of the press by promoting commercial consolidation in ways that shut people of color out of media ownership.  Newspapers were delivered at a discount rate in the earliest days of the US Postal Service to promote the exchange of ideas – but these discount rates were only available for papers written and published by white men.  There has been media owned and operated by African-American, Native American, Asian American and Latino communities in the US for over two hundred years, and they were denied these advantages.  This book aims to establish a comprehensive history of those voices.  Hopefully elementary schools around the country will incorporate the story of these figures into the curriculum they offer to students of all backgrounds.

Alongside the story of this resistance, it tells the sad story of the force with which the government sought to marginalize and stamp out minority press ownership and activity.  Mergers like the 2011 purchase of NBC by Comcast are the outgrowth of a trends that go all the way back to the days of the Pony Express.

Sometimes the means were obvious and violent.  The Texas Rangers went after journalist Jovita Idar for reporting on their brutality against the Mexican-American community.

When they showed up on her doorstep in Larado determined to destroy her press, she stood in their way while reciting the US Constitution’s guarantees of freedom of speech.  A supportive crowd gathered to defend her and turned the Rangers away.  But the Rangers returned later that night after the crowd had dispersed, and carried out their mission.  In similar fashion, law enforcement in Memphis played a role in the destruction of the offices of Ida B. Wells’ paper The Memphis Free Press in 1892.  The Georgia Guard threw the press of The Cherokee Phoenix, 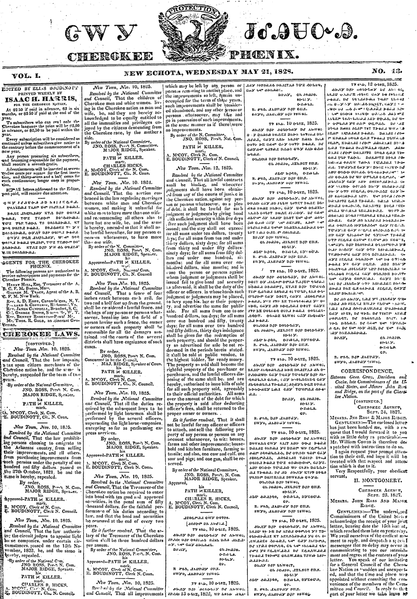 the first Native American newspaper, down a well in 1835.  The Roosevelt administration considered jailing members of the black press during the second world war for advocating a “double V” campaign, meaning victory over both fascism in Europe and Jim Crow in the United States.

Other times the legal means of controlling the channels of communication were more subtle and commercial.  One of the most powerful aspects of the book is the way it situates the monopoly of communication in the larger context of the development of monopoly capitalism in the US  There is a remarkable passage in the book that documents how Western Union and the Associated Press colluded to control the media of their day in a way that is eerily reminiscent of the current battles Verizon and Comcast are waging to restructure the internet.  The telegraph system was developed in the 1840s with crucial assistance and support from the public, just like the internet.

But once the system was up and running, it was “privatized” in today’s parlance when the government allowed Western Union to capitalize on the public’s investment without sharing the rewards.

Western Union helped prevent the public from learning more about this by giving the nascent Associated Press a 50% discount on their highest expense, which was telegraph transmission.  In exchange, the AP “agreed, in the words of the association’s chief agent D.H. Craig, ‘to ruin a paper that buys news from any competing telegraph line’ and to refrain from criticizing the industry’s giant…By 1882, more than 80% of all the news that appeared in Midwestern newspapers originated from AP dispatches.” (p. 141) 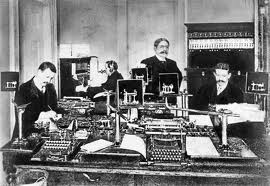 Minority press owners found it even harder to operate in this environment.  New technology increased the speed of communication, but it also set up a single “information highway” that could deny passage more easily than hierarchy of postal subsidies that had come before it.  Once monopolized, the new technology became an anti-democratic force that “brought back class stratification to our nation’s system of mass communication.”

An 1875 US Senate investigation of the AP-Western Union cartel found that “the news furnished to every leading citizen and almost every other daily paper comes from one source, and its preparation, wherever it is collected, is under the direct supervision of the agent of the seven associated papers in New York.  It is inevitable that the views, opinions, and interests of those papers should be expressed through this channel, especially by the full or short reports on topics they favor and oppose and the bias of the writer’s mind.”  The head of Bell Telephone supported public ownership of the telegraph system as a way of breaking the AP’s control over the dissemination of information.  He testified before congress that “the man who rules the Associated Press has a tool for shaping the opinions of millions.”  Gonzalez and Torres write that more than seventy bills were introduced in Congress before 1900 calling for a government takeover.  16 of the 18 House committees that looked into the idea supported it.  But it never came to pass.  “Western Union was able to prevent any action, thanks in part to the unflinching editorial support it enjoyed from the Associated Press and the backing of the commercial elite.”